This post will give you an overview of python language, how to set it up and run python scripts on your machine.

The initial release in 1991, Python have soon become one of the major languages in the world of programming. In this blog, you will learn all about the history of python, why it is so popular and some basic python language.

Python is a high-level interpreted language created by Guido van Rossum and was first released in 1991 as a successor to the ABC language.

…In December 1989, I was looking for a “hobby” programming project that would keep me occupied during the week around Christmas. My office … would be closed, but I had a home computer, and not much else on my hands. I decided to write an interpreter for the new scripting language I had been thinking about lately: a descendant of ABC that would appeal to Unix/C hackers. I chose Python as a working title for the project, being in a slightly irreverent mood (and a big fan of Monty Python’s Flying Circus).

Python was not popular for a long time. It was not until 2012, Python started gaining some popularity among the developer base. According to a blog by TechRepublic, The rise of popularity of python in because of the high demand for this language in Data Science and Artificial Intelligence. This was in turn fueled by the rapid increase of third-party libraries of python, that enables the programmers in a wide range of fields to switch to python.

Using Python, you can do (quite literally) anything you want. Ranging from Web Development to App Development to Data Science to Machine Learning and a ton of other things, all thanks to thousands of third-party libraries that you can include in your project. Some of these libraries include Tensorflow (used for Machine Learning and Artificial Intelligence), NumPy and SciPy (for executing mathematical equations and scientific computations), Django and Flask (for web development) and even cython (this library enables python to be compatible to C-family languages, C/C++)

With that, let us look at some basic python syntax and stuff. I’m going to call this section of the blog as Python language… A1 – A2 level… tutorial… blog… thingy…

Well, of course, the very first step for learning python is installing the Python interpreter to your system.

Then, install it, if you don’t know how to install an application on your computer, then the best way is to click next until the installer starts installing the interpreter.

Then you have to set the Environment variable in your operating system. You can click below links to learn how to do that:

For Windows | For Mac | For Linux

After the setup is over, it’s time to check if you have successfully installed Python in your system. For that, open the command prompt (for Windows) or Terminal (for Mac and Linux) and type “python -V"

If everything is the same for you also, then you are good to go. If not, you can just comment below and I’ll sort out your issue.

To write code in Python or any other programming language, you need to use a text editor. If you are using windows, you can use “Notepad” but to keep some standards and uniformity, I recommend VS Code.

You can also use a platform called Google Colab, which is an online python environment where you can do experiments and heavy duty work that your macine is not capable of.

Now, open that and write the following code:

And save this file as hello.py and save somewhere and remember it’s path. Now, open the command prompt (Windows) or terminal (Mac or Linux) and write this command:

If you're using Colab, then just press the "Play" button next to your code.

In programming, variables are used to hold reusable data. They also provide a way of labeling data with a descriptive name, so our programs can be understood more clearly by the reader and ourselves. Just like in math problems you probably write, "let the final answer be x" and then you solve for x in the rest of the solution.

Just like that, in programming, you use variables to store something that you will later use in the program. There are mainly 3 different types of variables:

If you want to know what def is, read Part 2 of this series after reading this post.

You might have noticed # <— thing. This is how we write comments in python, comments are those texts in a code that is not executed by the interpreter. The interpreter ignores the comments as your crush ignores you.

There are two types of comments:

You are probably wondering, Why we use comments in coding if that is ignored by the compiler or interpreter? If yes, then that is a very nice question and you will find the answer along with 6 other tips to improve the quality of your code here, How to write Good Code

Unlike other programming languages like JAVA and C/C++, Python is a loosely-typed language. Which means that there is no definite data type for a variable, you can use a variable as a string and the same variable as an integer. Consider the following code:

What are Data Types? It's basically a way tp tell the computer what type of data that variable should store, is it a number or is it text or anything else?

Arithmetic operators are used with numeric values to perform common mathematical operations, such as adding two numbers or multiplying them.

Here are the operators that come under Arithmetic operators: 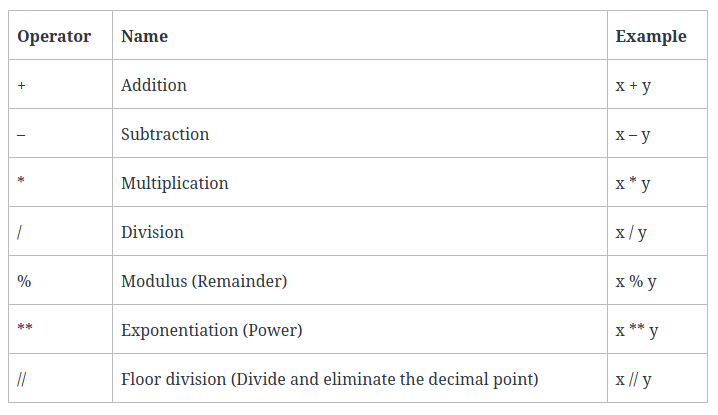 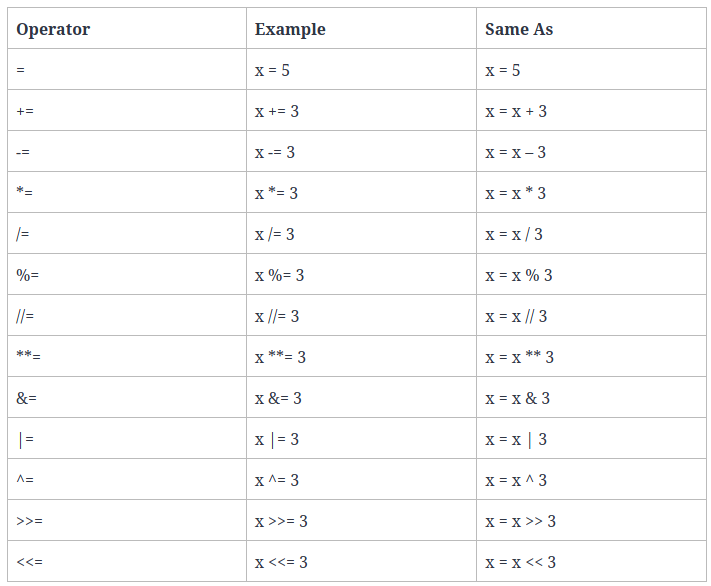 It’s not the end…

Check out Part 2 of this post to learn more advanced Python concepts.